Well, not really. But in a recently released Sigma Force novel entitled The Devil Colony, by New York Times bestselling author James Rollins, Laser Techniques Company was woven into a thrilling high tech action adventure. Rollins is well known for his ability to integrate real life technology and science into the story line of his novels. "That's where LTC came into the picture" stated LTC President and Founder James Doyle. "I had no idea Rollins had researched our company and included it in his novel. Frankly, I got a kick out of it - great read too!" 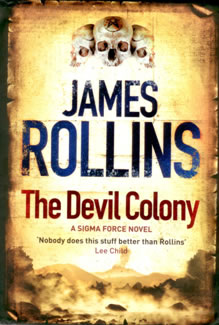 "Within a few minutes, a window opened on one of the monitors, ready to accept data. The window ledger read LASER TECHNIQUES COMPANY, LLC. It was a company out of Bellevue, Washington, that worked with NASA, developing patented tools to detect erosion, pitting, scuffing or cracking in metallic surfaces, covering a gamut of uses that included space-shuttle thrusters, military hardware, nuclear steam generator tubes, and underwater pipelines. The laser device could pick up and photograph minute changes in metal that the eye could easily miss.